How the Lost Confederate Gold was Stolen 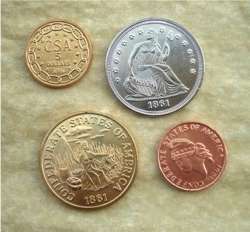 The night was typical for late May in Chennault, Georgia: a little humid, but the ground where the Confederate soldiers slept was cool and welcoming. Captain Parker tucked his satchel beneath his head and finally drifted to sleep, worrying about the priceless treasure he was guarding.

His scouts had reported seeing Union cavalry ahead on the road to Augusta, so they had to find another way. He wished this trip were over already.

Hidden in wooden barrels or not, it wasn’t safe to travel with this much treasure.

Around midnight, one of the guards was alerted by a rustling sound. Suddenly, ragtag men rushed the wagon.

“Woohoo!” one of the bushwhackers yelled, kicking a barrel off the back of the wagon.

This crew wore ragged uniforms of both blue and gray – and there were many of them. The guard stood silently as the crowd descended.

The barrels exploded coins, socks full of specie, and ingots as it hit the hard ground.

Parker awoke to the thud of a man hitting the ground next to him. It was the guard, who’d been struck unconscious by one of the bushwhackers – some of whom stood knee-deep in Confederate gold.

One of the soldiers glanced his way, pulling a revolver from his hip.

“I know you’re tempted to try and stop us, but there’s far more of us than you. We don’t want to kill you. We’ll just be taking payment for our services from this here treasure you were trying to hide. We’ve lost more than this will ever cover, and we don’t give a damn about them frogs!”

Parker knew many had lost everything in this war. Families, fortunes, and even entire towns had been destroyed, leaving some men had literally nothing to return to.

He knew it was foolish to ask his men to fight for the payment of a war they never wanted, to risk their lives one more time.

He threw up his hands and stood silently, accepting. The bushwhackers loaded their satchels,pockets, boots, and even their canteens with as much loot as they could carry.

The night ended with the sounds of coins hitting the ground like heavy rain drops. As the thieves rode away into the night, loose coins jostled out of their clothes as if to offer payment for compliance.

The Confederate’s massive treasure shipment melted away in that Georgia night. It was never recovered.